Formed in 1984 by lifelong Hamilton resident Dr. Russ Weil, the HASJB has developed into one of the premier amateur big band organizations in Canada. The HASJB has an impressive record, having been twice named the most outstanding band in its class in Canada. It is the recipient of 10 consecutive regional gold awards, 3 national gold awards, an award of excellence at the Clark Terry Jazz Festival at the University of New Hampshire, 3 awards of excellence at the Tri-C Jazz Festival in Cleveland, Ohio and standing invitations to many of the world’s great jazz festivals. 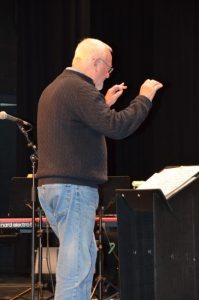 In 1995, 2000, 2003, 2007, and 2012 the band performed at the world -famous Montreux Jazz Festival in Switzerland, an event that has over the years, been graced by the greatest names in jazz. The band has played ten concerts in Montreux and has made appearances at jazz festivals in Vienne, Avignon, Juan-les-Pins, Aix les-Bains, Aix-en-Provence and Reims in France along with Freiburg in Germany, SanRemo in Italy and additional concerts in Brienz, Switzerland. Special appearances came at the request of the Federal Minister for Canadian Heritage and the Canadian Ambassador to France to promote Canadian culture by performing an all-Canadian program in 2000 and 2003 at the Canadian Embassy in Paris and again at the Ambassador’s home for a private diplomatic function to celebrate Canada Day 2000.

In 2003 and 2012, the tour included a special concert for the Juno Beach Memorial to Canadian Veterans in Courseulles-sur-Mer, France, with a program featuring the music of WWII. In 2007, the HASJB was the headline act in Ste. Die-de-Vosges, France for the 400th anniversary of the naming of the Americas by the scholars of Ste. Die.

In 1998, the HASJB was featured at the International Association for Jazz Education Conference in New York City, an event attended by some 8000 jazz artists and educators from all over the world. In Canada, they have performed for the Prime Minister, 2 Governors General, the Lieutenant Governor of Ontario, at Queen’s Park in Toronto, at numerous civic celebrations,  and at a special celebration for the Golden Jubilee of Queen Elizabeth II in Hamilton before over 15,000 appreciative fans.

Membership – There are three bands in the organization. Membership is available to all between the ages of 11 and 25. Entry to each ensemble is by audition. All groups are completely open and non-discriminatory. Each band usually consists of 5 saxophones, 5 trumpets, 5 trombones, guitar, bass, piano, drums and vocalist. During the past 32 years, over 1,000 young musicians have participated in the All Star organization, and many have gone on to pursue additional studies or professional careers in music or music education all over the world.

Program – During the organization’s history, they have concentrated on music of the “big bands” with special attention to the masters – Duke Ellington and Count Basie and the wonderful music of Ella Fitzgerald and Billie Holiday to name but a few. The All Stars often perform ‘tribute’ concerts to sold-out audiences, where they focus on the repertoire or style of a particular jazz great. The All Star Jazz Band has been featured many times at major theatres in Hamilton and has played to enthusiastic audiences at some of the great jazz venues in Toronto including “Ontario Place”, the “Montreal Bistro” and the “Rex Hotel Jazz Club”. In addition to performing with the Hamilton Philharmonic Orchestra on two occasions, the HASJB has released 9 CDs to date, featuring some of the greatest names in jazz, who have “guested” over the years. They include Phil Nimmons, Pat LaBarbera, Rob McConnell, Rick Wilkins, Kenny Wheeler, Guido Basso, Alex Dean, Mike Malone and David Braid – an “all-Canadian” line-up.

The Mission of Hamilton All Star Jazz Band Inc. is “Music and Youth Building a Better Community”. HASJB’s aim is to be the leading arts organization for youth in the Golden Horseshoe.

Our young people act as ambassadors for our community. We focus on the development of life skills – responsibility, commitment, teamwork, leadership and respect – in an intellectually and artistically challenging environment. We concentrate on excellence in music performance for local, national and international audiences. HASJB Inc. provides a proud legacy that is directed by an enthusiastic group of directors, advisors and volunteers who administer a self-sustaining, multi-tiered program for young people. We are a registered charitable organization for the youth of Canada.

Jim Witter Show On November 24th is Sold Out,